So recently, my favorite toy soldier maker Armies in Plastic had an introductory sale on their new begged sets. These bags were already a more economical way to get their figures, so a 40% off deal made it even nicer. I had never run across a really sensible way to buy the WWI US Marines I had always wanted, so I bought two of the WWI set, which came with 8 marines, 8 French, and 10 Germans. 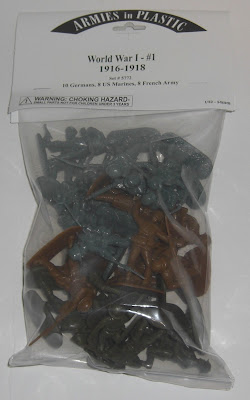 Now the set description on the site didn't say what color the French would be, nor which version of the Germans would be coming (pickelhaube or stahlhelm). Additionally, no one ever posts what I deem acceptable photos of these sets, something I aim to remedy as I get the figures myself.

First, the French. As you can see, the bagged sets come with the French in the khaki, not horizon blue. A shame, I rather like the blue, but whatever. These are very nice figures, well detailed and in dynamic poses. They are armed with Lebel rifles, the officer has one of those sad little French revolvers, and the machine gunner has a chauchat. Greatcoats and Adrian helms all around. I'm quite happy with these, despite my snarkiness over them being brown and not blue.

US Marines. Now, I have wanted this set for a darn long time. It's the same poses as the US Doughboys, but in green, which I like better. I am happy that the machine gunner has a Lewis gun instead of a chauchat, but even more happy about the shotgunner. There are simply not enough army men armed with credible shotguns in the world these days.

The set comes with 10 Germans, in Stahlhelms. I actually prefer these to the Pickelhaube, so win on that front. These are nice poses as well, though I am hard pressed to say what the machine gunner (second from the left) is supposed to be holding. It looks a little bit like a smallish maxim gun, but I don't think that's a real thing. Mysteries abound!

Now, friends, this is not all I got in this order, so stay tuned for more!
Posted by CounterFett at 7:30 AM 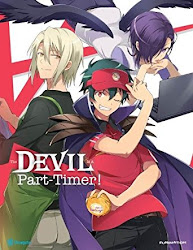